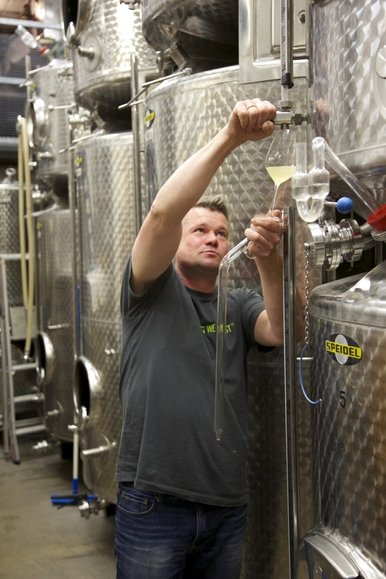 Appelation: Baden-Wurttemberg
Viticulture: Biodynamic certified by Demeter
Main Grapes: Riesling, Grauburgunder, Sauvignon Blanc, Trollinger, Lemberer, Pinot Noir (Spätburgunder)
Size: 10 hectares
Production: 7 to 10 000 cases a year.
Terroirs: Gipskeuper, Schilfsandstein, Kieseldandstein, Stubensandstein.
When it comes to making Rieslings, Jochen Beurer stands as a man apart. A one time European BMX champion running a small garagiste estate in Swabia, at the farthest southern end of Germany, Jochen could hardly be farther removed from the staid, landed traditions of his more Northern neighbors, and his dry, terroir saturated wines from a variety of Jurassic and Triassic soils on the hills around Kernen im Remstal have similarly little in common with historical conceptions of “German Riesling.” These are, first and foremost, Swabian wines, steeped in the traditions of a region that has long remained outside the national mainstream. 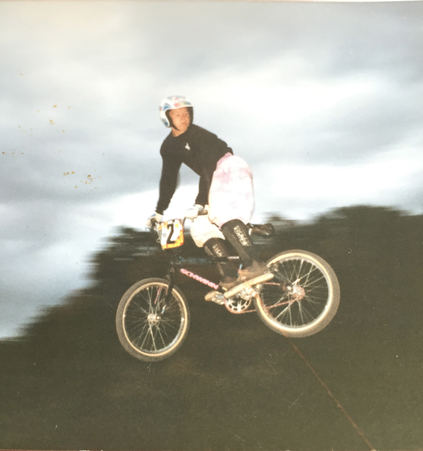 The Beurer family have farmed the land in Kernen, just outside of Stuttgart, for generations, growing fruit and making wine that, as with many Swabian vine growers, ended up in the bottles of the local coop (the Remstalkellerei). Then, in 1997, former European BMX champion, Jochen, his wife Marion and father Sigfried set out on their own, making and bottling the wine for themselves (for the first two years, the winery literally was a garage).

In 2003 Jochen started experimenting with organic viticulture and spontaneous fermentations, converting fully to biodynamics over the next few years.  And as these things have gone along, Jochen and his wines have found their own inimitable voice. He is a man who does things very much his own way, and that way yields some of the most remarkable, terroir expressive wines we know. In fact, we can think of no other winemaker whose wines speak of the soil -- a mixture of ancient lime- and sandstones, and the ancient Keuper soils beneath them -- as much as Jochen’s do.

The process begins in the scrupulously tended, biodynamically farmed vineyards, and is designed to yield wines that breathe life, “not cola.” Respect for nature and patience are reflected everywhere: in cool years, Jochen is inevitably the last to pick; successive tries are the norm; spontaneous fermentations follow their own course, usually including malolactic. Whereas some winemakers are anxious to rush wine through a “process,” with Jochen patience is the key. Many is the time we have visited in February or March to discover that the fermentations, far from being done, are just waking up after their winter nap. Elevages are similarly slow and careful, with wines being committed to bottle when – and only when – Jochen feels that the time is exactly right, “for him.”

The results are singular: a range of completely unforced yet strikingly intense wines that are long, structured and saturated in minerality. They too stand apart, incomparable to those of other regions, yet offering a glimpse into what the future of Riesling can be. These are some of the most individual and important wines in our book, and we are pleased to see that the rest of the world is starting to notice: Jochen’s line up of whites was recently declared ‘the best in the country’ by a leading German wine critic.

Riesling Trocken:
From a mixture of parcels comprising the rich variety of soils that go into the terroir cuvees, this is made in much the same way as it’s big brothers. It inevitably results in a racy, mineral-driven Riesling with a crunch of lime zest in its fruit. Jochen calls this, “breakfast Riesling.”

Weiss Trocken:
This blend of Müller-Thurgau, Silvaner, Weissburgunder, again from a mixture of parcels and soils, is a broader, more savory wine than the Riesling, though like it’s sibling, it still a very soil driven wine with expressive, cruchy minerality, and shows surprising length and precision.

Trollinger Trocken:
Typically, Jochen’s Trollinger (from a mixture of parcels of vines on Bunter Mergel und Kieselsandstein soils) is the crunchiest, most terroir expressive example of this Swabian specialty grape that we know of. At his own suggestion, Jochen has begun to bottle our version of this version of this lithe, racy little wine without any make up (like many Poulsard, and many other cool climate grapes, the locals have always tended to chaptalize Trollinger as a matter of course), and we couldn’t be happier.

Rot  Trocken:
On release, this blend of Spätburgunder, Cabernet Dorio, Dornfelder, Portugieser is surprisingly deep and intense, with spicy dark fruit, crunchy acidity and a decent whack of tannin in the finish. Yet given a year or two in bottle, and even a warm year like 2011 starts to take on a lithe minerality – somehow, in Jochen’s hands, it turns out that even Dornfelder can show terroir. Who knew?

The heart of Jochen’s work lies in his Rieslings (Riesling makes up 60% of the estate). All but one of these (which we’ll deal with later) come from vineyards abutting the Stettener Pulvermacher (pictured below), a huge, curving (from SE-SSW facing) block of vineyards that vary in their elevation from around 280 at the base to some 360 or meters at the tree line.  Depending on the height of the slope, the results of centuries of erosion (and flurbereinigung, the collectivization of the vineyards in the 50s and 60s) has exposed different aspects of the Jurassic and Triassic deposits of limestone, colored sandstones and Keuper that these hills are made (as revealed in Jochen’s helpful graphic).

Gipskeuper:
These southeast facing vines, at around 280-310m above sea level, planted in the pre-Jurassic, gypsum-based keuper (shale) subsoils at the base of hill, give the friendliest, fruitiest of Jochen’s dry Rieslings. It has the lime-zest snap of the white label, but it adds a layer of depth to its fruit, and has a tang in the finish that is all its own.

Schilfsandstein:
The vines here are around 35 years old face south, at around 310-340m, on soils formed out of the remains of the reed beds on the floor of an ancient sea: crumbly, alkaline and laden with quartz and other mineral deposits. They yield a wine that is intensely linear and snappy, with a zesty, limestone infused finish.  It isn’t often that one finds oneself craving oysters with Riesling, but with this one, it suddenly makes sense.

Kieselsandstein:
The vines here are again 35 years old and south facing, at around 350-360m. These are, geologically younger soils, again rich in minerals, comprising fine- to coarse-grained silicious lime and sandstones rich in feldspar, kaolin and mica. This is, in many respects the sweet spot of the hill, producing a wine this is richer than the Schilf, yet still fine, detailed and rich in minerality.  Part of the cuvee inevitably sees time in foudre, at even at the grey label level, this is a fantastic wine.

Riesling Grosse Gewachs:
In 2013, Jochen was admitted to the VDP, a grower’s organization that comprises many of Germany’s finest estates (along with many clunkers who are members by dint of history). Although it’s an honor of which Jochen is rightly proud, it meant that he had to reorganize the way he names his wines in order to fit in with the VDP’s collective practices, which are based on some particularly amusing ideas about how to make wine easier to understand. This has meant that his best wine, made from a parcel of his oldest vines on Kieselsandstein located in the historic Stettener Pulvermächer vineyard, and which up though the 2012 vintage was called “Riesling Junges Schwaben,” in now called “Stettener Pulvermächer Riesling Grosse Gewachs.” Whatever the name on the bottle, this is a thing of beauty. We could tell you about the winemaking – stems go into the GG, and the fermentation and elevage take Jochen’s meticulous approach to another level – but really, this is a unique, and very special wine that defies words and needs to be tasted.

Junges Schwaben Riesling:
Until 2013, the last of Jochen’s single vineyard Rieslings, which is grown on the other side of the valley from the wines above was called “Riesling Stubensandstein.” This is the highest of Jochen’s vineyards, a clos of 40-year-old Riesling vines at the very top of the Stettener Häder vineyard. The slope here is so steep that a horse is used for much of the farming, and the soils are sandstones mixed with calcareous marls and clays. They yield a more intensely yellow-fruited wine, pale colored and with a very fine, hauntingly mineral finish. From the 2013 vintage, this vineyard is bottled under the name “Riesling Junges Schwaben 1er Lage” (premier cru). But if you come across wines labeled this way prior to 2012, be aware that they came from the vineyard that is now labeled Grosse Gewachs. In time, we hope, the confusion will pass, but for now, we’ll raise a glass and toast whichever genius at the VDP decided that what the word really needed was for all wine to be simple easy to understand… “as Burgundy.”

Zweigelt Untere Bunte Mergel:
Jochen’s Zweigelt, from vines on the ‘other’ side of valley, on Bunte Mergel (marl, a lime rich clay) soils, is an intensely dark yet bracingly fresh wine that eschews the clumsy tannins that often plague this variety. It’s suave, long and yet still has more than enough stuffing to make short work of a steak.