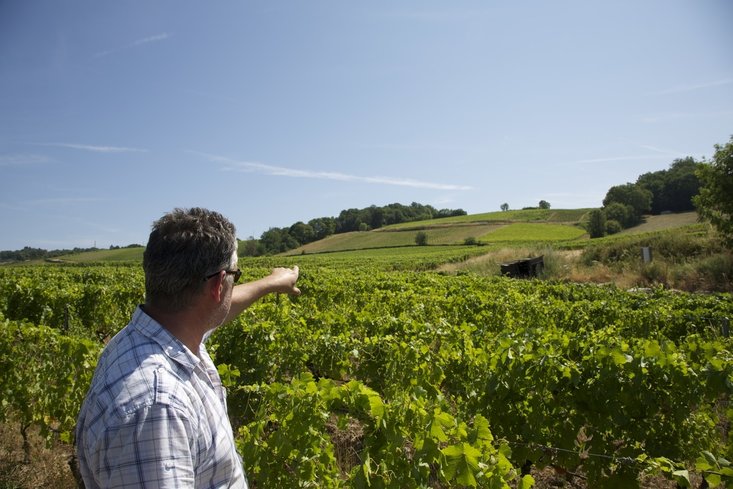 AOCs: IGP Pays Allobrogie, Haute Cotes du Beaune, Bourgogne
Varieties: Chasselas, Savagnin, Pinot Noir,
Viticulture: Organic (Ecocert)
Size: 6 Hectares
Production: 9000 bottles annually
Terroir: Silex, granit, sand, limestone
Just outside the small village of Ballaisons, on slopes overlooking Lake Geneva (on the French side of the border they call it Lac Léman), Dominique farms 10 hectares (2.5 of them in Burgundy in the Haute Côte de Beaune and Pommard, more on that later) of certified organic (practicing biodynamic) vines planted in rich yellow marl and granite soils with a limestone base, and some silex stones on the surface. His vines are separated into 27 parcels of different soil composition, each of which is harvested by hand (he says it takes 2.5 months to harvest here as Chasselas takes so long to ripen), and vinified separately. He is deeply committed to Chasselas, and has also added tiny parcels of Savagnin, Pinot Gris, Sauvignon Blanc and Chardonnay. These are not old vines, but in the hands of this careful winemaker they are capable of producing wines of depth and complexity.
Dominique Lucas hails from a family of Burgundian winemakers – he is the 5th generation – who own a small estate outside of Pommard. After completing oenology school, he opted out of returning to the family estate simply because he did not want to work within the strict oversight of the AOC, choosing instead to settle in the Haut Savoie (in and around the AOC Crépy to be exact) in 2008. Though his family’s history is steeped in Burgundian ways, you won’t find much of this influence in his cellar. Dominique vinifies his grapes in an array of different amphorae, barrels, and concrete eggs – no doubt a hint at his close friendship with Dominique Belluard who lives about an hour away in Ayse. Fermentations occur naturally and the only addition to the wines is a bit of sulphur at bottling.

With ample cut and a sublime balance of fruit and minerals, all wrapped up in a package that is as clean, textured, and compelling as anything, these wines simply offer pure drinking pleasure. As Dominique continues to experiment – just this year he built a concrete pyramid out of sand, rocks, and water found on his property for future fermentations – and as his vineyards continue to mature and thrive, there is no doubt in my mind that these wines will only continue to get better.
Dominique's Chasselas are the true stars of his lineup, and his Chardonnay and Pinot Gris are unlike any that I've had before.

Dominique's Chardonnay (vines planted in 2009) is fermented in the aforementioned concrete pyramid. The result is a much more chiseled and ethereal interpretation of Chardonnay that you don’t get in either the Jura or Burgundy. Think orchard fruit, lemon curd, and mountain wildflower.

I don’t often find myself drinking or even thinking about Pinot Gris, Dominique's is exceptional. Soft and aromatic on the nose, yet packs a wallop on the palate with vigorous acidity.

Quintessence is a fascinating entry into the wines of Dominique Lucas. The Chasselas used for this cuvée is from a recently started négociant project.

P’tit Coin de Paradis comes from a small parcel of 25-year-old Chasselas vines planted lower on the slope closer to Dominique’s house. The wine is vinified using only native yeasts and is raised in a combination of concrete eggs and neutral demi-muid barrels.

Terroir du Leman un Matin Face is made from Chasselas planted in clay-rich soils. I find this wine to offer more in terms of layers of texture and in density than his other cuvées. It still maintains a ravishing acidity and ample minerality like all of his wines, but seems a bit more open aromatically.

​The Chasselas for his C de Marin cuvée is 40 to 50 years old and planted in granitic soils with glacial morass definitively making it the most mineral-driven of his wines, but it doesn’t lack any of the opulence found in the others.