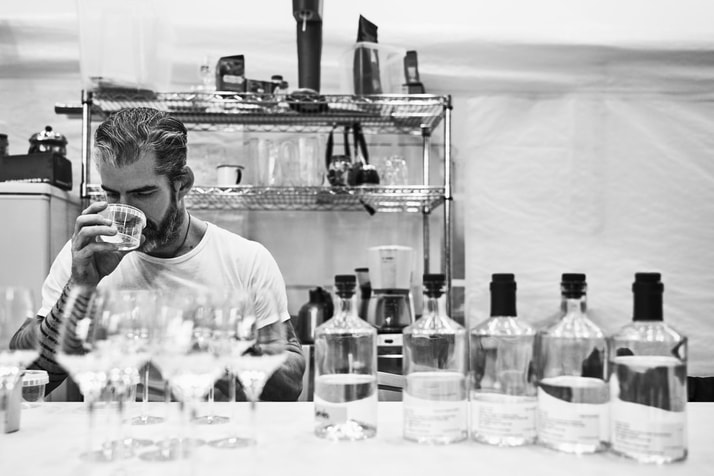 To put it simply, Empirical Spirits’ primary focus is to explore flavor incessantly, by any means necessary. This being said, it’s no wonder that it was founded by Noma alums, Lars Williams and Mark Emil Hermansen in 2017 in a warehouse on an island just outside of downtown Copenhagen.

After 10+ years at the famed restaurant, the duo took a closure for moving and reconfiguring out of the original location as an opportunity to embark on their own quest into spirits. This was no accident, as spirits is category Lars had often thought of as being the most “democratic” process for capturing flavors; a process that preserves the natural essence of the ingredients indefinitely, allowing more people around the world to experience them.

Using a chef-like philosophy in their approach to acquiring ingredients that are in-season and of the highest quality, they set about to create a distillation method that suited their goals. This lead Lars to become enveloped in vacuum distillation, a process in which the ingredients are heated to a much lower temperature relative to traditional pot still distillation, allowing for many of the properties of each ingredient to remain present in the final product. The first was built by Lars himself, and resembled the kind of machine you might find in sci-fi movies from the 1960s. They have since grown their operation to include multiples of these special stills, as well as other machinery to aid in the delicate extraction of flavor from their raw ingredients.
This approach to capturing flavor also influences every step leading up to distillation.

Grains - The current spirits are based on barley. First, the grains are steamed before inoculating them with koji-kin spores - a type of mold you find in foods such a miso, shoyu and soy sauce.

Barley Koji - The koji ferments until it forms into a dense white cake-like substance. During this time, the complex starches are broken down into enzymatic proteins called amylase and protease. These proteins are what gives us the umami, floral and sweet notes we are looking for.

Brewing/Fermentation - The barley koji is blended with Pilsner malt, naked barley, and Belgian Saison yeast. This mixture is allowed to ferment slowly so all flavors created in the process are preserved. They use fermentation not only to produce alcohol, rather it is seen as the biggest potential in creating flavor. Each spirit is double fermented, with each fermentation adding complexity and depth.

Distilling - Vacuum stills are used to create thespirits. Rather than using heat, we apply vacuum pressure between 5 and 7 torres of pressure. This allows for distillation at temperatures between 5 and 30 degrees Celsius, and as a result retain all the flavors of the botanicals, grains, and yeast.

Cuts - Around 50 cuts from each 500-liter distillation. This allows them to pull apart flavors into different segments. Each cut is chosen for a specific character before being pieced back together.

Blending - Blending is done using different ingredients, such as vinegar and kombucha that are made in-house from the spent grains and botanicals created during the first distillation. This allows us to play around with different ABVs so that we can create the most flavorsome results.
Helena:
Helena is Empirical Spirits most unadorned product: a double fermented clear koji spirit, the purest flavor expression of fermentation. Made from barley koji, pilsner malt, and saison yeast, this product blends Eastern and Western spirits methods to create an extremely smooth base spirit with subtle nutty aromas and a delicate sweet barley character. Koji provides a flawless flavor profile that provides a sweet, umami and floral note.

Charlene McGee:
A juniper spirit inspired by the Scandinavian culinary tradition of smoking. Named after the underage pyrokinetic main character Steven King’s novel, Firestarter, Charlene McGee is made from juniper berries, juniper wood, barley koji, Belgian saison yeast, and pilsner malt. Juniper berries are smoked with their own wood, lightly crushed, macerated, and gently distilled at low temperatures to preserve the fruity, vibrant integrity of the botanical and the seductive smoky flavor profile. The final blend is matured in Oloroso casks to impart a faintly sweet and cozy note of woodiness. The spirit has refreshing base notes of fresh juniper, fruity blackberries and resinous, fragrant juniper sap that leaves a smooth, smoky finish. Unlike a traditional heavily peated spirit, this is an entirely brand new kind of flavor experience with smoke.

Fallen Pony:
This is an aromatic double-fermented quince tea spirit made from a base of quince, barley koji, Belgian saison yeast and pilsner malt. The spent fruit material is made into a quince tea kombucha and then vacuum distilled. This is then added to rectify the final product to preserve the sweet botanical notes and create balanced acidity. This is a deceptively light and surprising drinking experience at 35% ABV that will appeal to the adventurous imbiber who has tried everything.

Fuck Trump And His Stupid Fucking Wall:
Fuck Trump and His Stupid Fucking Wall is a refreshingly smooth, warm, vegetal tasting habanero spirit made from a base of pearled barley, Belgian Saison yeast, and koji. The clear product is rectified with a habanero vinegar that gives it a 27% ABV that imparts an intensely fruity habanero profile without any of the heat. The Empirical Spirits innovative high-pressure, low-temperature distilling process removes capsaicin, the painfully spicy active component in the chilies, and preserves the pleasantly floral and fruity notes typically hidden in habaneros, for an eye-opening tasting experience.

Ayuuk:
Pasilla Mixe is a special, smoke-dried chili grown at 2,700 meters above sea level by the Mixe people — known in their native language as Ayuuk. Once fully ripened, the chilis are partially dried on the plant, and finished on wicker racks over gnarled hardwood smoke. The true Pasilla Mixe possesses a twilight, dark red fruitiness and a unique earthiness that reflects the rugged terroir in which it grows. For Ayuuk, the chilis are macerated in low wine, distilled, blended with spent Pasilla Mixe kombucha, and finished in Oloroso casks for five days. The base of Purple wheat and Pilsner malt rounds out the chili’s natural earth tones and pleasant spice.

The Plum, I Suppose:
This spirit is based on the dried inner plum kernel, which has a similar scent and flavor to almonds. The plum kernel has marzipan high notes, and a nuanced sweetness that’s refreshing and bright. The Plum, I Suppose captures the flavor of plum from the fruit and almond from the seed. We suppose the plum is our rose.