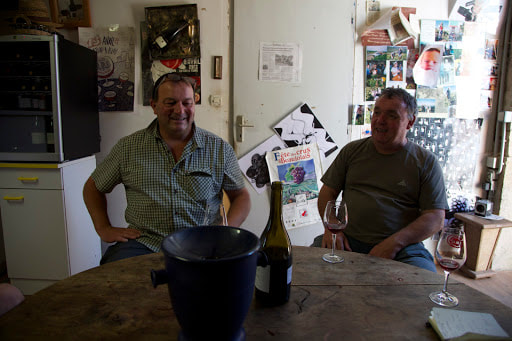 AOCs: Beaujolais-Villages, Chiroubles, Morgon, Régnié, Fleurie
​Varieties: Gamay
Viticulture: Organic
Size: 5 hectares
Terroir: Decomposed Pink Granite, Chalk, Sand
Gilles Paris is one of five brothers, born and raised in Quincié-en-Beaujolais, all of whom are now involved in grape growing in one capacity or another. However it wasn’t until he met his now ex-wife, Christine, and moved to Chiroubles where her family had vines within the Cru, that he produced his first wines in 2005. He didn’t start out making natural wines, but quickly became sympathetic to the movement, edging closer and closer to entirely native yeast fermentations and zero sulfur additions every year, though you’d be hard-pressed to tell that these were natural. They are all as clean as can be; they are classic, beautiful Beaujolais that keep us coming back for more every year.

Gilles makes a full range of wines from Beaujolais-Villages and multiple crus.

His Beaujolais-Villages is sourced from his brother, Jerome's, grapes, which Gilles helps to vinify and sell. Harvested in October, 13 days semi-carbonic maceration in stainless steel. Vines were originally bought in 1964 and planted at 400m above sea level. Fresh, beautiful wine; classic Beaujolais profile.

Chiroubles “Terroir” is fermented and aged entirely in stainless steel tank. 50-year-old vines, semi-carbonic maceration for 15-20 days; no SO2 added.

Chiroubles “Vieilles Vignes” comes from Gilles’ oldest vines that are around 70 years-old. Semi-carbonic maceration, aged entirely in neutral oak barrel, with no SO2 added at any time. This is the stuff you want to lay down in the cellar and revisit year after year.

Chiroubles “Vieilles Vignes L’Esperée”  is from a special, cooler parcel of north-facing vines made the same way as the Vieilles Vignes cuvée. With many characteristics of the VV, but with a touch more grip and lift due to getting less direct sun. Really incredible.

Fleurie is a parcel of vines 25- to 60-years-old planted in soils rich with decomposed granite 250m in elevation. Aged mostly in neutral barrique, the rest in stainless steel, no sulfur added.

Morgon hails from vines that are planted in the southernmost part of Morgon, almost in Brouilly. This is a deep and elegant wine, with silky fruit and spice. Just gets better and better with air. Age-worthy? Absolutely.

Régnié comes from a parcel of 30- to 50-year-old vines panted in sandy, granitic soils. Great fruit, structure and minerality.