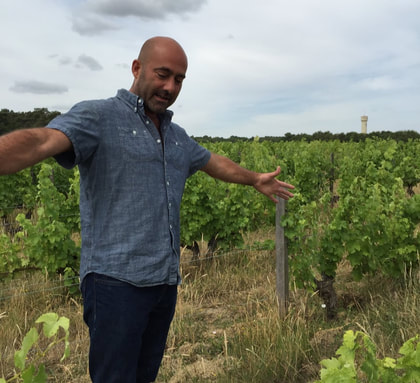 AOCs: Touraine (bottled as Vin de France)
Varieties: Sauvignon Blanc, Chardonnay, Gamay, Cabernet France, Cabernet Sauvignon, Pineau d'Aunis, Côt
Viticulture: Biodynamic
Size: 6.5 Hectares
Terroir: Limestone, Clay, Silex
After many years working in food and wine in New York City, notably as co-founder and chef of ICI in Fort Greene, Laurent decamped to the Loire Valley to begin a new life among the vines making the wines he had always loved. At first he began working in the vineyard for both Noella Morantin and Clos Roche Blanche to learn the ropes, and began experimenting with his own wine in the cellar. After Noella purchased a few hectares of vines elsewhere, she transferred a portion of the parcel she had been renting within the clos to Laurent so he could began vinifying his own wine in earnest.

After a few small vintages, Didier and Catherine (the proprietors of Clos Roche Blanche) announced that they would be retiring. And with no children who wanted to take over the domaine, they offered it first to Laurent and another worker who was with them for years, Julien Pineau and they now each own 6 hectares of this historic estate. The transition went smoothly, as they both promised to continue farming the same way it has always been, and the wines are a fascinating new take on this unique terroir as Laurent comes into his own as one of the great winemakers in the region.

As you may have guessed, fermentations are done with native yeasts, and sulfur additions are minuscule depending on the specific needs of the vintage.
Lucky You VdF: 80% Sauvignon Blanc/20% Chardonnay from a parcel of vines planted within the Clos Roche Blanche in 1973. Fermented and aged in stainless steel tanks with a touch of SO2 added before bottling. This was one of the wines that started it all.
Blank VdF: A new cuvée from Laurent made from 100% old-vine Sauvignon Blanc. Done entirely in wood, it is fermented in tronconic vat before élevage in neutral demi-muid. Serious and elegant, which are two things we don’t normally associate with Sauvignon Blanc.

Pop! VdF: A fresh pét-nat made from Cabernet Sauvignon and a bit of Pineau d’Aunis.