AOC: Morgon, Beaujolais, VDF
Viticulture: Biodynamic (Demeter)
Size: 5 hectares
Production: 2,500 to 3,300 cases annually
Terroirs: Clay, schist, and clay over limestone in the south, granite in the north
Bruno Debize remains a mystery to most, including us.  A serious vegetarian, ex-punk, biodynamic maniac, he has to be one of the most interesting characters we've met in our work.  Bruno tends to analyze everything very seriously, and takes his time listening to what a vintage is telling him.  There are no set of rules in Bruno's winemaking, more a succession of small decisions to achieve his goal.  He is, to us, one of the most talented viticulteurs and vignerons in France.

When we started working with Bruno, he was making mostly vineyard selected bottling from a few places in and around the little village of Bully in the southern part of the Beaujolais:
​
-Les Cambertiers is a parcel planted by Alain, Bruno's father, in the mid-1980's.  Clay over limestone on a gentle slope.

-Les Ecoirets is a vineyard of older vines on schist that was partly uprooted by the French authorities to build a highway.  Bruno almost gave up and went south when that happened in 2010.

-Bruno’s Beaujolais Blanc comes from a single vineyard of old Pinot Gris and a little younger (40-50 years old) Chardonnay on white clay and broken limestone in the Bully.

After 2012, Bruno decided to stop farming altogether, and leased all of his vineyards to a group of friends he had trained himself.  He buys all the fruit coming from his property now, but he is not involved in viticulture anymore (even though we seriously doubt he isn't still walking the rows like a maniac).  On top of the parcels he previously farmed, Bruno also buys from a few older growers with very specific sites in the village, giving birth to wines like "Apinost" and "Beaujolais-Batard." 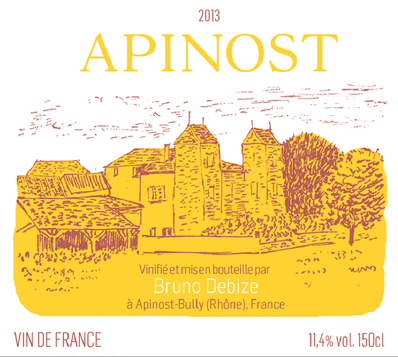 Les Cambertiers and Les Ecoirets are firm, tannic wines, due to Bruno's belief in extended macerations and pumpovers/punchdowns. He likes to extract tannins and make dark, long-lived Beaujolais that becomes more burgundy-like after 10 years.

L'Homme a la Veste is based on the idea of blending two types of soils, clay over limestone from the south and granite from the north.  A very youthful, less extracted wine than Bruno’s other cuvees.

Apinost is from a 100-year-old parcel on limestone, which has about 3% Pinot Noir coplanted.  Bruno likes to say that this was vinified the exact opposite way than a carbonic maceration – high temperature fermentation in foudre.  The result is a see through, very Pinot-like Beaujolais that is one of the most feminine, delicate wines Bruno has ever made.
​
Depending on the year, the Beaujolais Blanc is either 100% Chardonnay or a Chardonnay and Pinot Gris blend.  After a few years, it becomes quite elegant and Burgundian, minus the heavy oak influence of its northern cousins.