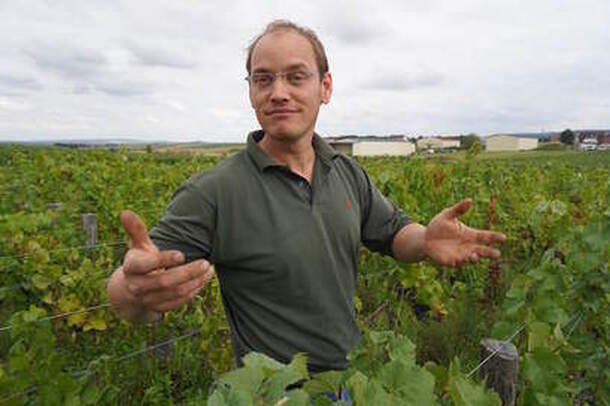 Thomas Perseval’s grandparents created this domaine in Chamery as a co-op, and his parents began to make their own, estate-bottled wines in the 1980s. Thomas returned to the domaine in the 2000s after winemaking school, with the goal of changing things, starting in the vines. In 2009 he began to convert to organic viticulture, and was certified organic as of the 2012 vintage. Presently Thomas disgorges both his parent’s wines and his own wines, but labels them separately in order to make a distinction between those that are made from organic grapes, and those that are not. He also changed the regime in the cellar, incorporating (in his own words) a more “laissez faire” philosophy.  Thomas, like many of our other favorite young Champenois, is part of a region-wide movement to make more terroir-driven, vineyard-forward wine in Champagne by working organically in the vines, eliminating cultured yeast whenever possible for the vins clairs, incorporating less reductive processes in the cellar, and lowering dosage to highlight ripe, well-tended fruit. He’s also a really nice guy.

Thomas’ 2.5 hectares of vines (divided amongst five parcels) are in and around the town of Chamery, in the northwestern part of the Montagne de Reims, a 30-minute drive west of the city. The soils are clay, sand, and “calcaire limoneux.” He uses copper in the vines, and tries to reduce the amount every year. The oldest vines at the domaine were planted in the 1970s during his grandparent’s time.

The first two wines to be released under Thomas’ name are Extra Brut Tradition, and Extra Brut Rosé. Tradition is a blend of 45/45/10 Pinot Noir, Pinot Meunier, and Chardonnay. Raised 70% in enamel, and 30% in fût, from only the 2012 vintage. Extra Brut Rose is raised 50/50 in enamel and barrel, with some reserve wine in the blend from the 2010 vintage. It’s 50/20/30 Noir, Meunier, and Chardonnay. Both “intro” level bottlings show great depth and complexity for a first release, with an emphasis on ripe, red fruit, structure, crisp acidity, and fine, creamy texture. The malo happens naturally with these wines, yet they maintain low ph and superb balance due to Thomas’ efforts in the vines. Thomas now works with 30 barrels in the cellar, and leaves the wines (particularly the cuvées parcelaires, single cépage wines, which will not be released for some years) for between 8 and 14 months of élèvage on lees in barrel. In addition to Thomas’ two first releases, and his single cepage wines that will be released years down the road, Thomas also makes a “Grande Cuvee,” which will be disgorged in 2016. This wine is a blend of half and half Chardonnay and Pinot Noir raised in barrel, with no dosage. It’s a gorgeous example of vinous, unapologetically dry, terroir-driven Champagne; we look forward to its release.

We went into this project of importing Champagne with a clear idea of what we were looking for: Champagne that drinks like wine, Champagne that expresses terroir rather than a style of fabrication, Champagne made by a vigneron rather than a guy in a fancy suit. As is often the case scouting for new talent in a region, we received a tip off from a friend, Aurelian Laherte, who suggested we look up Thomas Perseval in Chamery. We quickly discerned while tasting his vins clairs that there was much potential at the domaine. We’d seen the vines, observed that he was doing everything right, and were gratified to taste that his “laissez faire” approach in the cellar was yielding stellar results. Subsequent meetings with Thomas at which we tasted future releases further confirmed that here was a rising star. On top of that, we really liked him. It’s perhaps a small thing, but an important one.
Producer's Website
WINES
​Coteaux Chmpenois Blanc: 2019: 60 chardonnay, 30 petite meslier, 15 arbanne, and 15 pinot blanc, direct press and raised in neutral barrel 19 months