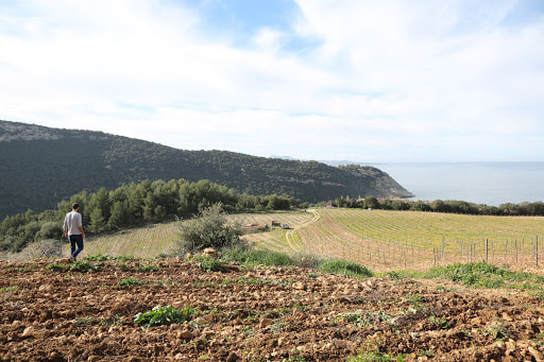 AOC:  Patrimonio
Varieties:  Niellucciu, Vermentinu, Muscat Blanc a Petite Grains
Viticulture:  Organic (ECOCERT)
Size: 15 hectares
Terroirs: Limestone
If you aren’t familiar with Corsica, the main event is Patrimonio. This AOC covers 400ha with half of them being owned by the two largest producers, and the other half split up amongst 30 smaller growers. If you haven’t already guessed, Clos Marfisi is part of the latter. Brother and sister, Mathieu and Julie are fifth generation at the helm of this estate, having taken over from their father, Touissant, when Julie returned in 2001, and her brother in 2012, from having careers elsewhere in France.
Now, we thought that we had seen it all in terms of limestone, but Corsica takes the cake. Clos Marfisi’s vineyards (which Touissant planted about 40-50 years ago) rise up from the Mediterranean with southern and western exposures on steep slopes that are practically white with large chunks of broken up limestone. Seriously impressive. Equally impressive is the fact that they never gave into outside pressure and the entirety of the estate is planted to local varieties, so you won’t find any Grenache here. Their father is still very active in the vineyards, and is the main reason that this estate has never been touched by pesticides or herbicides, which were shunned for one reason or another by previous generations of vignerons on the island. This commitment to organics continues and the estate will be certified Bio by the 2018 vintage. Vestiges of the old guard remain in the cellar as well where native yeasts have always been used for fermentations, and sulfur levels are kept to a minimum.
As president of the Patrimonio AOC, Mathieu has a clear vision for where the estate is headed, and we like what we are seeing. Their commitment to honoring the past while shaping their own future is incredibly exciting to us.
Patrimonio Blanc “Grotta di Sole”: Made from 100% Vermentinu from the limestone soils mentioned above, it is fermented naturally in stainless steel before being racked into cement vats. One of the vats went through malolactic fermentation, the other didn’t, and the tanks were blended after 5 months for bottling. Very low SO2.

Patrimonio Rouge “Gritole”: 100% Niellucciu from vines planted in 1990 facing west; all limestone soils in a parcel closer to the austere coastline. Very gentle pressing into stainless for fermentation, with 18 months of élevage in cement. An almost translucent purple in the glass, this is an approachable wine, meant to be consumed in its youth, served slightly chilled.

Patrimonio Rouge “Ravagnola”: Also made from 100% Niellucciu, but from a younger plot of vines planted in 2004 and facing south, to take advantage of the sunny clime. The difference here is that this is fermented and aged entirely in stainless steel for 18 months. This is the more broad-shouldered and structured of the two reds, but still drinks very easily.

UVA: A blend of 25 % Minustellu, 25% Carcaghjolu Neru (both local, oft overlooked grapes), and 50% Niellucciu, all sourced from the Ravagnola vineyard. Fermented and aged in stainless steel, half is direct press juice, half is fermented whole cluster.

Les Nuits Rouges: Carbonic maceration of Niellucciu that sees 8 months élevage in stainless steel. The grapes come from both the Gritole and Ravagnola parcels. No sulfur added.

Muscat du Cap Corse: This is a very traditional wine from the island, made from the grape Muscat Blanc a Petit Grains. Even though this style has been made here for centuries, it was only granted AOC status in 1993. At Clos Marfisi, the grapes are left to dry in the sun, concentrating their sugars, and then pressed into tank to begin fermentation. It is then fortified to halt primary fermentation resulting in a decadently sweet wine, but that still has enough acidity to maintain balance. This wine would age particularly well.