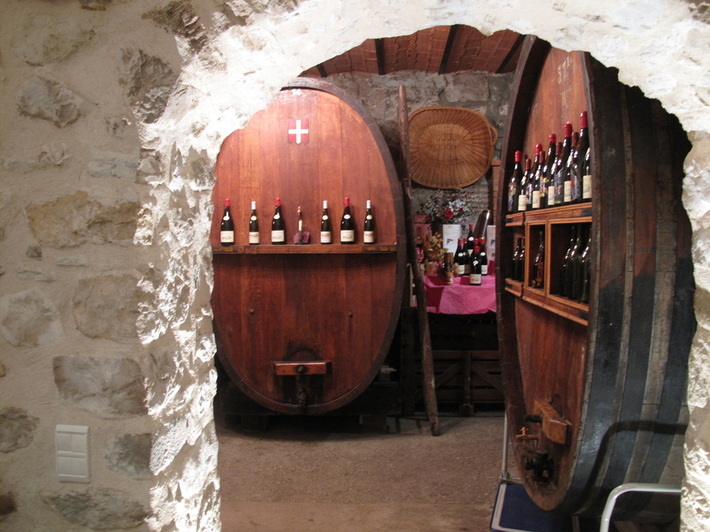 The Dupasquier vineyards are located in a southwestern lobe of the Savoie, close to the Rhône Valley.  One drives through a large mountain called “Le Dent du Chat” to arrive at the domaine, and the terroir seems almost instantly to become more Rhône-ish on the western side of this tunnel. The town is called Aimavigne, and its most prestigious vineyard is the incredibly steep “Marestel” Cru (pronounced “mah-reh-tehl” no “s”). The vines benefit from steep, sun-drenched slopes, primarily limestone soil, and the cooling effects of Lake Bourget.  David works these vineyards with a tractor and by hand – the Marestel vines entirely by hand, as a good percentage of the best sites are too steep to work with a tractor.  Plowing is done once per year for every other row and David believes that the biodiversity this leaves in the vineyard is critical for the quality of wines.  Harvest is by hand and clusters are hand selected.
The word “traditional” invariably gets used when Dupasquier’s wines come up in conversation.  There are many reasons for this, one being that the wines see quite a long period of aging in old, neutral barrel and in bottle before release.  In general, the Dupasquiers leave their wines in barrel on fine lees until just before the next year’s harvest. The wines then see another 18 month in bottle. In some other regions, this type of regimen might not be so unusual, but it certainly is in the Savoie, where the typical wine is fermented with added yeast and vinified quickly in stainless steel. This brings us to another aspect of the Dupasquier’s traditionalism.  All the wines are fermented with native yeast, and even in the coldest years, they don’t inoculate.

The style of these wines absolutely reflects the place, as well as the vineyard and cellar work.  There’s a warmth and ripeness to the wines that calls the Rhône Valley to mind, yet with freshness, acidity, and cut reminiscent of the Savoie.  The whites are broad across the palate, the Jacquère more delicate, and Roussette richer, with Marestel the richest, also the most structured and age worthy.  The reds also show a level of ripeness that is extraordinary for the Savoie.  Gamay and Pinot Noir from Dupasquier have a gorgeous core of vivid, sweet red fruit and a textural harmony that speaks to their years of aging in barrel and bottle before release.  In our opinion the Dupasquier’s top red wine is their Mondeuse.  Like other great medium bodied, tannic varieties such as Syrah and Cabernet Franc, Mondeuse benefits from long aging in neutral barrel, which softens the tannins, integrating them with the rest of the wine’s deep, spicy aromas and flavors.