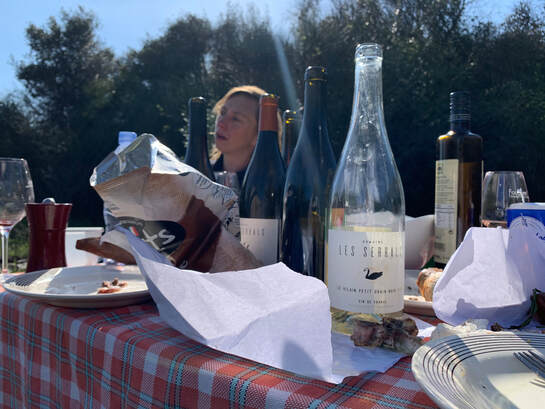 AOC: Faugères, Vin de France
Varieties: Syrah, Cinsault, Grenache, Mourvèdre
Viticulture: Certified Organic (AB), Biodynamic (Demeter)
Size: 6.4 hectares (owned) plus 2 hectares (rented)
Terroir: Schist, Sandstone, Limestone
Chloé and Fred met when Fred had what he called "a boring job" in the petroleum industry and Chloé and left her career working for various non-profits, having fallen in love with wine working for an importer in London. He managed to charm Chloé by taking her to a bunch of "old people's" restaurants in Paris as he was a true fan of white tablecloth establishments and old-school fine dining. Over the next few years of searching for the perfect place to settle down with their two young children, they ultimately decided to dive in head-first and established Domaine Les Serrals in Faugères after finding the perfect plot of 6.4 hectares of vines in 2016. 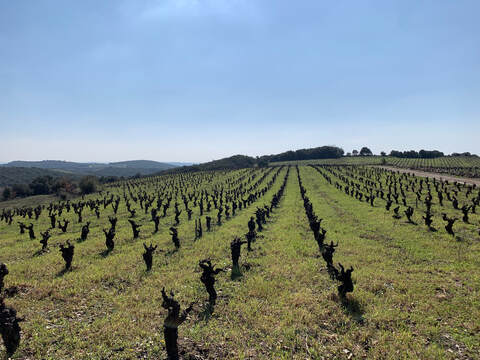 The vineyard plots are all next to one another, making the domaine a virtual "Clos" with vines aging from 20 to 80 years old. Everything is planted in the "Gobelet" method; the soils are schist-based with sandstone and limestone.

At first they were renting a cellar and they are now building their own facility right next to the vineyard, underground in the schist to help maintain constant temperature year round. As they are new to winemaking, Chloe and Fred love to experiment. There are not many rules set in stone at the moment, it's more of a loose set of techniques and vessels at their disposal with which they try to achieve their desired outcomes. This leads to a variety of wines which tend to vary from vintage to vintage depending on conditions. Some are "vins de Bouchon Lyonnais", as they call them; some are white wines made out of red grapes; some are more textured wines - there isn't anything they won't try. At the moment everything is fermented and aged mainly in stainless steel with a few barriques and demi-muid for élevage. Going forward the main focus will be shifting to the use of various cement tanks.

Sur le Zinc: The vin de soif - or cuvée de "Bouchon Lyonnais" - this is their entry level glou glou made with the Côte de Brouilly in mind more so than the south of France. Harvested early, syrah is given the carbonic treatment and some free-run carignan juice is added for some backbone. It's a fresh, clean wine fermented and raised in stainless.

Cricri d'Amour, Faugères AOC: Grenache and cinsault from a rented parcel. They are just converting the parcel to organic farming (as of harvest 2021 it will be certified). It is currently owned by an old woman, famous in the area for opening the very first gay club in Montpelier back in the 1970's when it was still illegal to do so. It's a sturdy, deep wine that still is highly drinkable.

Côte a Côte, Faugères AOC: Old vine syrah (from a single slope) and carignan. The grapes are vinified separately and raised almost two years in a combination of stainless steel tanks and old demi-muids. Serious and long, it's now one of our favorite expression of Faugères.

Aquilaé, Faugères AOC: Chloé and Fred's idea of the appellation. Mainly mourvèdre with a splash of syrah from the older vines - averaging 40 years old - in a parcel with the most exposure. The first pass through this vineyard usually goes into the rosé, and the second pass (the last harvest each vintage) is used to make this wine. Everything is fermented whole cluster and it is raised 18 months in neutral barrique.