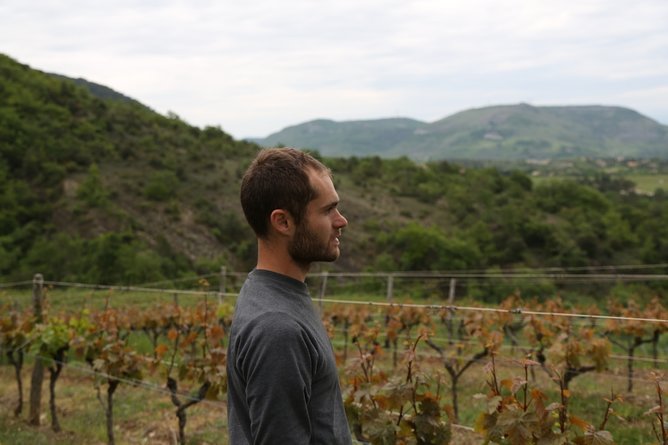 AOCs:  St.-Julien-en-St.-Alban, Brézème
Varieties:  Muscat, Chasselas Rose, Grenache, Syrah, Cinsault
Viticulture: Organic
Size: 5 hectares
Terroir: Clay, Limestone, Gneiss, Marl, Schist, Granite
Martin Texier (you may have heard of his father, Eric, the now famous northern Rhône natural wine producer) began making wine in 2014 after a previous life studying economics. After leaving university, he ventured into music (he is an accomplished DJ) and also spent time in New York City learning about the wine trade here (he held internships at both Uva Wines in Brooklyn and Flatiron Wines in Manhattan, as well as the greatest record store in the world, A1 Records). It was after this that he realized that his calling was to follow in his father’s footsteps and return to the vines.

He now has five hectares in and around St.-Julien-en-St.-Alban, planted to classic Rhône varieties, both red and white. There are many different soil types here: clay, limestone, gneiss, schist and granite, making for a wide range of different styles of wine to be made. Martin’s passion is to revive the local traditions of working the natural way, both in the vines and in the cellar (native yeast fermentations, no sulfur). The results he has been getting this early in his career are a clear testament to his skills.
Petit Nature is Martin’s pétillant naturel made from Muscat, Chasselas Rose, and a mélange of different table varieties. Direct press to stainless steel; bottled with 15g/liter residual sugar to carry out secondary fermentation in the bottle. Aromatic, dry, and energetic.

His Roussanne is from young vines (the first vintage he was able to harvest was 2018) planted in granitic soils. Direct press to concrete for fermentation before racking to neutral barrique for élevage.

Le Preyna is the name of an old parcel planted with 75% cinsault and 25% grenache in deep granitic soils. The grapes are pressed and fermented separately in concrete tanks and blended before bottling. This is a typical, light-bodied, everyday wine local to the region.

Martin’s Grenache is from 30-year-old vines planted in granitic soil with a veins of limestone, gneiss, and schist running through it. All stems are included and the grapes are pressed by foot after a week-long maceration. No SO2 added.

His Cinsault is made from the oldest vines in St.-Julien, planted in the 1950s. Limestone and marl soils. Harvested by hand; about half of the grapes are destemmed before a six-day maceration. Pressed into concrete tank for fermentation and élevage with no SO2 added at any time.

Brézème is an anomaly in the northern Rhône. It is a single slope of rocky, broken down limestone (compared to the granitic soils that are the norm around these parts) rising above the alluvial plains of the Massif Central. It is only planted to 22ha of vines, with the majority of them farmed by Martin and his father, Eric. Martin’s wine from here is sourced from 30-year-old Syrah vines. Half-destemmed, and pressed after a ten-day maceration. Élevage is done in concrete tank with no sulfur added. Very pretty, classic wine.

Martin also makes a rotating cast of La Boutanche wines for us.